The past year has seen the passings of three of my childhood “heros,” two of which were moonwalkers and the third the country’s first man to orbit the earth. The deaths of the original astronauts from the 60s will obviously grow in the coming years. With the passing of Gene Cernan, cuts the number of men who did leave footprints on another celestial body down to six out of the original 12. From Apollo 11, Buzz Aldrin and from Apollo 12, Alan Bean. Flight 15 is Dave Scott, the commander, his co-pilot, Jim Irwin was the first of the club to die, when in 1991 he succumbed to a heart attack. Both moonwalkers from Apollo 16, John Young and Charlie Duke are still with us, and for 17, Jack Schmitt. Apollo 16 is the only mission with the lunar crew intact. And only four missions with the entire crew intact out of 11

Cernan was very good for the cause of space exploration, keeping the memory of Apollo alive, never seeming to tire when retelling the same stories of his three days on the moon at the Taurus-Littrow landing site, no doubt for thousands of times. He’d talk of fixing the fender on the lunar rover with a moon-chart and some duct-tape and his desire to hand his title “Last Man on the Moon” to someone else. I was hoping that he would live enough to pass the mantle. He will be missed.

I encourage anyone with young children to try and take them to some event where one of the Apollo astronauts are, and hopefully meet one of the moonwalkers (nothing against the “third guy” who didn’t make it to the surface, though. I mean you Al Worden!). Imagine them telling their grandchildren the time they actually met “a moonwalker.”

Apollo 17 gave us some of my favorite lunar imagery. This is one of the most beautifully composed of the lunar images. A dramatic angle that really tells the story in a single square photo. In this case, it was Cernan who  handled the camera with Jack Schmitt posing. Since the landing site was the most northern one, the Earth was relatively low on the horizon so made this kind of shot possible without Cernan having to get down on his back. None of the early space flights carried flashes for the cameras, and as photography was generally meant only to document the stuff outside the spacecraft, and not inside, very few in cabin shots were ever taken. But, since there was no strobe, the images are illuminated with natural light, frequently making both beautiful and sublime memories of the mission. Here is Cernan after one of the moonwalks, caked with moon dust, likely exhausted and elated at the same time and probably wishing for a beer and shower right about then. 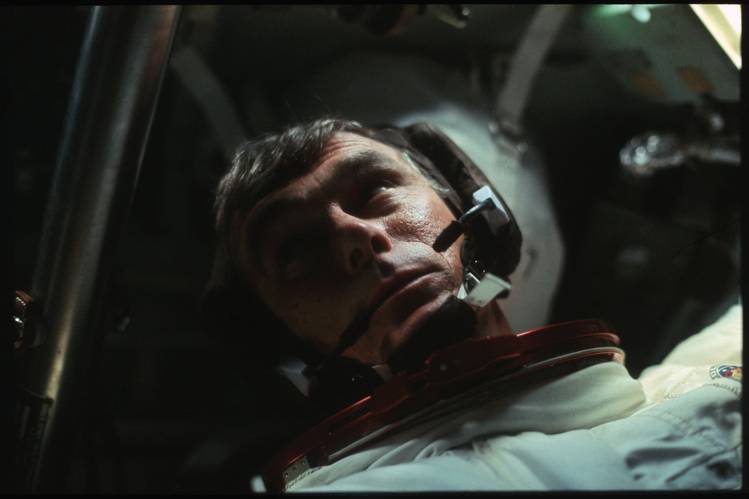 And another existing light shot back in the command module.